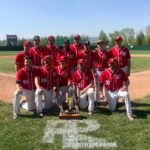 The Wolfpack took a short roster up to Westlock, Alberta May 25th and 26th to compete in the John Golonowski Memorial Tournament hosted by the Westlock Red Lions of the NCABL.

Thanks to the help of non-roster invites Duncan Elgert, Anthony Grouette, Jordan Wong, and Dan Chappel, the Wolfpack were able to field a competitive team and won the tournament in decsive fashion, allowing only a single run (unearned) through three games.

Overall, the tournament was a fun way to get some early season reps and extra at-bats before the FMBA season really starts firing on all cylinders. Highlights included Sean Maguire coming out of retirement to throw five shutout innings against the Red Deer Razorbacks in Game 1 of the tournament and logging his first win in a Wolfpack uniform since May 6th of 2018; Jordan Wong hitting a towering home run to right field in Game 2 against the host Red Lions; and Dirk Dembroski throwing a complete game shutout to wrap up the third and final win of the tournament on Sunday morning against the St. Albert Cardinals.

The Wolfpack are back in action Wednesday May 29th as they resume FMBA play against the White Sox at FMBA Field as they look to continue their hot start to the year and extend their current wining streak to seven games.