The Wolfpack were finally able to open their 2020 season on Tuesday night and came away with the victory in an 8-4 extra innings win over the Guns. After their first three games were rained out, the skies parted on a chilly Tuesday night to allow the Wolfpack and Guns to kick off their three game season series.

The game, and by extension the 2020 season, started off with a bang as Wolfpack shortstop Carlos Charmell smacked a leadoff home run to left field to stake the Pack an early one run lead. The rest of the offense followed suit, loading the bases up and scoring two more to make it 3-0 before the Guns even had a chance to bat.

Dirk Dembroski was given the nod on the hill for the season opener and did not disappoint. He battled through six innings allowing only one earned run and striking out four. Some defensive miscues in the fourth inning cost the Wolfpack their lead when the Guns tied it up 3-3, but they were able to regain it in the top of the seventh inning. Dembroski came out to try and close out the game but started run out of steam and pitched himself into a bases loaded jam. Curtis Smith then came in to try pitch them out of the jam but wasn’t able to prevent the tying run from scoring, forcing extra innings and costing Dembroski his first win of the season.

In the top of the eighth the Guns went to their bullpen and the Pack offense roared back to life. The go-ahead run was scored from second on a clutch single by Axel Christoffersen, which was follwed up by a walk and two hits and some wild pitches to plate four in the final inning.

The Wolfpack will wrap up their season series with the Guns at 9am and 12pm Saturday July 11 with Christian Lapointe slated to take the mound in the early contest.

The Wolfpack improved to 12-8 on the season with a blowout win over the Guns Monday night. The offense took a couple innings to warm up, but ended up scoring twelve runs on the night when all was said and done.

Dirk Dembroski (2-1) got back into the win column with a strong performance on the mound, he allowed only three runs (one earned) over seven innings while striking out seven and walking only one, the Guns only mustered four hits against him.

Cam Williams, Fraser Armstrong, and Trent Lawson continued to swing hot sticks, as they all contributed multiple hits on the day, and they combined for eight of the Pack’s twelve RBI in the game.

Michael Goldade reached base in four of his five plate appearances as the table-setter at the top of the lineup, but his biggest contribution of the night came in the third inning when he chased down a would-be leadoff double in the gap screaming off the bat of Guns second baseman Conner Leavitt for the first out of what ultimately became a three up, three down inning. The score was only 2-1 at the time of the catch, and there was a palpable shift in momentum from that point forward.

The Wolfpack are back in action Tuesday night when Cory Lawson takes the mound again in search of his first career victory against the White Sox at 6:30pm. 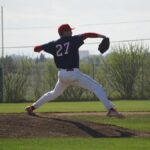 The Wolfpack swept their second consecutive double header with a Game 2 win over the Calgary Guns on Sunday night. Much like Game 1, strong pitching and timely hitting were the theme again as the Wolfpack won by virtue of the mercy rule for the third time in four games.

Curtis Smith (2-0) threw his second consecutive complete game shutout and tied the Wolfpack single game strikeout record with fourteen, the third time Smith has reached the mark. He allowed five hits and walked one batter. Smith now carries a 24:3 K/BB ratio on the season and has struckout 55% of the batters he has faced.

Fraser Armstrong caught fire at the plate in Game 2 after a sluggish opening weekend performance going 4 for 4 with 2 RBI and a run score, he finished the game a home run shy of his second career cycle. Michael Goldade pitched in three hits of his own to go along with three RBI and three runs scored after a similarly slow opener and was also a home run shy of his first career cycle. Goldade tacked on a couple steals in the game to retake his throne atop the Pack’s stolen base mountain.

The Wolfpack take on the early season surprise White Sox on Wednesday night at 6:30pm. This will be the first game against an opponent with a record over .500 for the Wolfpack in 2018. 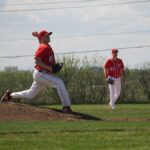 The Wolfpack continued their hot start to the year with their third consecutive win out of the gates in a 12-2 drubbing of the Calgary Guns on Sunday afternoon.

Christian Lapointe (1-0) spun a quality start on the mound for the Pack for his first win of the year by pounding the strike zone early and often. Lapointe went five innings with four strikeouts and allowed only three hits while walking two and hitting a batter.

The Wolfpack offense continued its torrid start to 2018, and only needed Lapointe to hold off the Guns for a couple of innings before getting the bats warmed up and really taking over the game. Blake Carruthers paced the offense by going 3 for 4 with two doubles and a triple. He also led the team by knocking in four runs. So far this season, Carruthers seems to be up to his usual tricks as he’s provided eight RBI already through three games, and is carrying an OPS of 1.500

There already seems to be an early season race heating up for the Rookie of The Year Award between newcomers Roly Diaz and Brendan Roworth. Diaz was an early season favourite after putting on a strong display during the preseason, but Roworth has impressed despite the small sample size so far. Diaz and Roworth are slashing .600/.600/.800 and .500/.833/.500 respectively. We will be keeping an eye on these two throughout the 2018 season.

Game 2 of Sunday’s doubleheader with the Guns is teed up for 5:30pm with Curtis Smith taking the hill for his second start.