The Wolfpack dropped their second and final game with the Dukes on Thursday night, losing by a score of 4-2.

Cory Lawson got the start on the mound for the Pack and pitched well enough to win. He held the Dukes to three runs over six solid innings and left it up to the offense, but they weren’t able to give Cory the support he needed to earn his first career victory as a member of the Wolfpack.

The bats were able to find holes all night, as the Pack out hit the Dukes twelve to ten, but abysmal baserunning mistakes all night cost them their scoring chances, and ultimately led to the loss.

Fraser Armstrong continued his strong month at the plate with two more hits, and Trent Lawson looks to be regaining his early season form with three hits of his own. Ray Tamayo also contributed two hits, and Matt Zanutto had a solid day at the plate going 1-1 with a triple and two walks.

The Wolfpack play two games against the second place Diamondbacks on Saturday morning before they host the FMBA Home Run Derby starting at 3pm.

The Wolfpack halted a thre game slide on Monday night by beating the Dukes 10-4.

They sent Cam Williams (2-1) to the mound in this one and Williams responded by throwing a complete game and lowering his season ERA to a solid 3.00 in the process. The victory brought the Wolfpack’s record up to 10-6 and put them back into third place over the Longhorns.

Aside from throwing a complete game victory, Williams also pitched in offensively with his first career four-hit game for the Wolfpack. He went four for four with two singles, two doubles, and two runs scored to lead the offense in a ten run barrage. Brandon Billesberger also hit his team leading sixth home run of the season (third in leage play) and continues to be on an absolute rampage at the dish through the month of July. Unfortunately for the Wolfpack, this was likely Brandon’s last game in 2019 as he heads down to the USA for a Phillies showcase before returning to school following the conclusion of this game. Fraser Armstrong also had multiple hits, collecting two triples and knocking in a team leading four RBI.

It was good to see the Pack get back to their offensive ways and punishing the baseball again, they will be back in action Thursday night for the second and final game of their season series with the Dukes.

The Wolfpack have struggled to find their form from earlier in the season that saw them rattle off two separate winning streaks of four games. They have now committed seventeen errors over their last three games, dropping the team fielding percentage from .924 to .900 on the season in the process.

This game was back and forth until walks and defensive miscues caught up with the Wolfpack in the late innings, giving the Dukes a lead that they wouldn’t relinquish. The final score was 13-9.

Jaret Loran (0-1) made the start for the Wolfpack and impressed yet again as he pounded the strike zone throwing eleven out of sixteen first-pitch strikes to the batters he faced. He finally gave up his first three earned runs of the year in this, his third appeareance of 2018, while striking out two and walking one through two and two thirds on the mound, he allowed five hits. Michael Goldade (1-1) was saddled with his first loss of the year as he struggled to consistently find the strike zone after entering the game in relief of Loran.

Offensively the bats stayed hot for the Pack but just weren’t able to overcome the walks and unearned runs provided to the Dukes. Blake Carruthers and Fraser Amrstrong both recorded multiple hits as their perrennial battle for the Silver Slugger award continues to heat up. Roly Diaz provided a bases loaded triple that tied him with Carruthers and Carlos Charmell for second on the club in RBI (13). The Wolfpack Rookie of The Year vote is going to come down to the wire this year as Brendan Roworth and Roly Diaz have been jockeying for position offensively all year, but with the emergence of Jaret Loran on the mound, there is now another name to keep an eye on as the 2018 playoffs approach.

The annual Longhorns Stampede Invitational tournament kicks off for the Wolfpack this Saturday, July 14th at 9am. 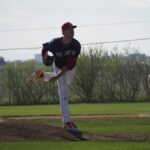 The Wolfpack won a tightly contested ball game 4-2 and handed the Calgary Dukes their first loss of the season Friday night to improve to 5-1 and take back posession of first place.

Curtis Smith (3-0) won his third conescutive start on the mound in this one allowing six hits, four walks, and added thirteen more strikeouts to his season total giving him thirty-seven on the year. He extended his league lead in strikeouts and is starting to distance himself from the rest of the pack as the two pitchers tied for second in that category each trail him by sixteen.

The offense capitalized on some early errors committed by the Dukes and helped the Wolfpack jump out to a four run lead after the second inning, and that would prove to be all Smith needed to seal up the victory. Shaun Connor and Carlos Charmell both led the Pack with two hits a piece, and Charmell played a role in all four of the Pack’s runs as he knocked in two RBI and crossed the plate twice himself. Trent Lawson collected his first career base hit for the Wolfpack in a solid debut, and Jaret Loran set the tone early for a great defensive day by tracking down a deep fly ball in center field in the first inning.

After a brief hiccup against the White Sox last week, the Wolfpack are back to their winning ways heading into a Sunday morning double header against the last place Airdrie Brewers, first pitch is at 9am.